Fresh off headlining the highly successful “Chaos & Carnage Tour”, SUICIDE SILENCE are thrilled to not only reveal the title of their upcoming album, Remember… You Must Die, but also provide some insight into its creation on Chris Garza’s own “The Garza Podcast”.

Be sure to check out that episode at the link below which features the full band speaking in-depth about the past, present and future. Their forthcoming 7th full-length album Remember… You Must Die was produced & mixed by Taylor Young (NAILS, Xibalba, Vitriol…) and is tentatively slated to drop in early 2023: https://www.youtube.com/watch?v=jeMQA5eP3QM

On another exciting note, the band have announced more US touring: “We’re heading out on The Omens Tour this September with Lamb of God, Killswitch Engage and Baroness! Tickets go on-sale this Friday, June 10th at 10am local time. You don’t want to miss this!”

with Lamb of God, Killswitch Engage and Baroness

This June the band will be coming to Europe for a number of selected festivals and an exclusive show in Frankfurt:

SUICIDE SILENCE have come full circle & returned to their original label home, Century Media Records. With nearly two decades of non-stop touring around the globe, hundreds of thousands of records sold and cementing themselves as a lynchpin band in modern extreme metal, the Riverside, California quintet has rejoined the label that released the highly acclaimed albums: The Cleansing (2007), No Time To Bleed (2009) and The Black Crown (2011).

June 24th will see the rerelease of their classic debut album as The Cleansing (Ultimate Edition) including liner notes by the band and extensive bonus material. 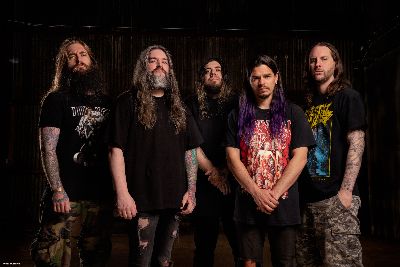