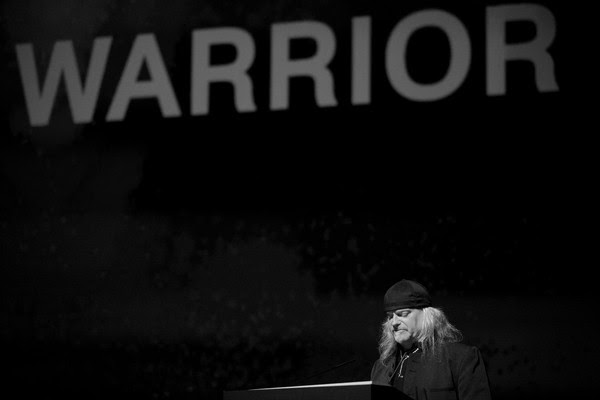 Four decades into his career as a musician, Hellhammer/Celtic Frost/Triptykon founder Tom Gabriel Warrior was among the recipients of the Swiss Music Prize 2021, awarded by the Swiss Federal Office of Culture in a ceremony on 17 September 2021 at Lugano’s Arte e Cultura (LAC) centre. This event marked the first time the Swiss Music Prize formally recognized the genre of heavy metal.

Statement by the Swiss Federal Office of Culture: Tom Gabriel Warrior’s bands have played a significant role in music history and influenced musicians around the globe. A metal music pioneer, Warrior is an idol not just within the boundaries of the metal scene, and as an advocate for animal rights, he aims to provide a voice to those who don’t have one.

Also among the winners of the Swiss Music Prize 2021 was legendary producer Roli Mosimann, Warrior’s past collaborator during the recording sessions for Celtic Frost’s Vanity/Nemesis album (1990) and Apollyon Sun’s Sub album (2000). Unable to attend the ceremony due to health reasons, Mosimann asked Warrior to accept the prize on his behalf.

Although I was very fortunate to be granted a loyal audience already early on in my career, not least in my native country of Switzerland, the local Swiss music industry and cultural institutions either ignored me or expressed derision for my music, and sometimes they even obstructed it. In their perception, it simply didn’t conform and wasn’t commercial enough. And indeed, my music was dark, experimental, and obstinate. But exactly due to these qualities, it was noticed abroad.

I do of course understand that receiving this prize is an honour, and I do feel grateful for it. But given that an inconceivable fourty years have passed since I first became a musician, this prize is also quite irrelevant to me by now. I have pursued my path regardless, without subordinating myself to any of the customary inbreeding rituals of the Swiss music scene, and without ever applying for any kind of cultural funding from the Swiss state or the relevant institutions.

The support granted to me throughout the years by the following individuals was absolutely essential, however, and my gratitude to them is limitless:

And there are many more.

Moreover, I would also like to express gratitude to those who do not kill animals, do not enslave them, and do not mistreat them, but instead respect and protect them. I bow to you.