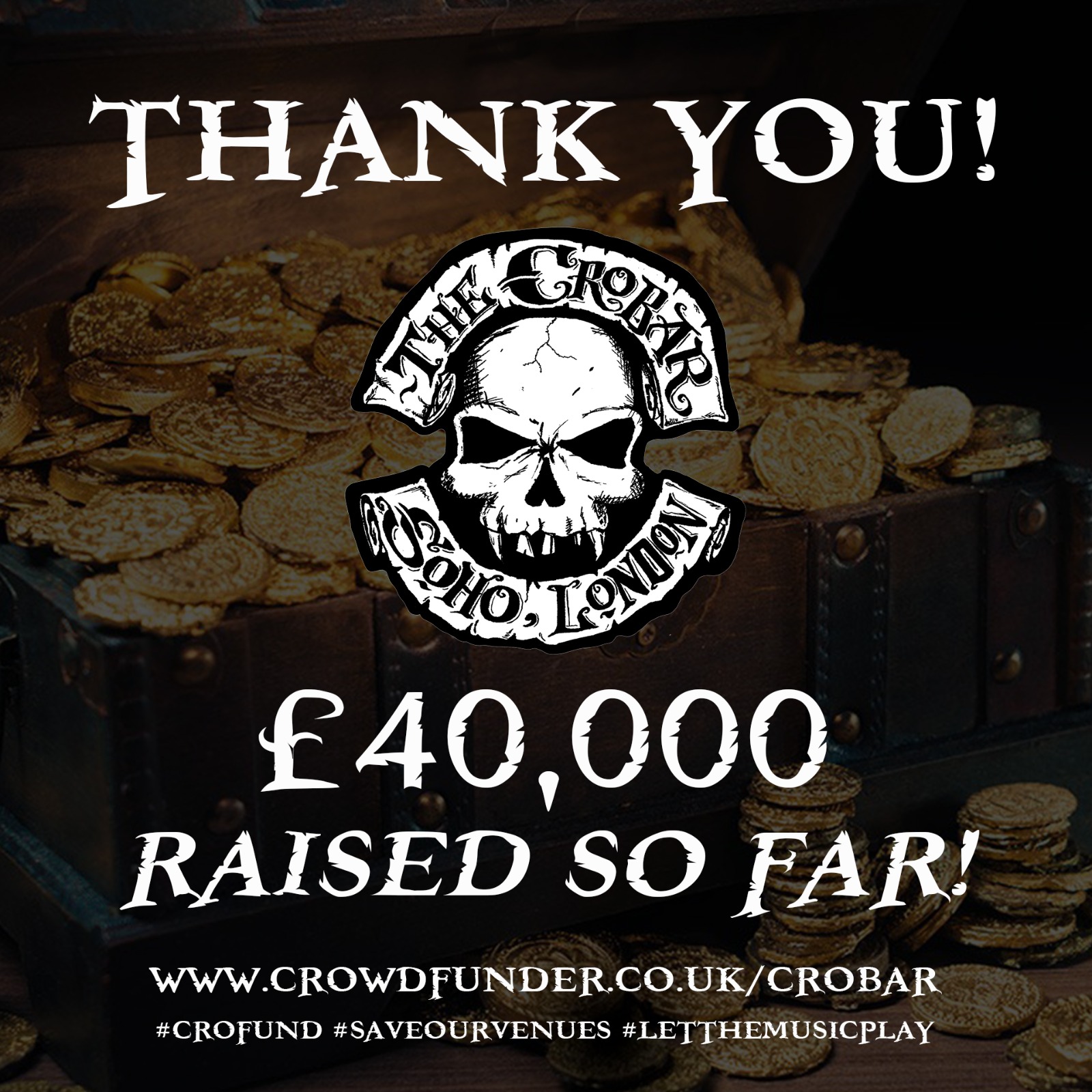 London, Tuesday 19 January, 2021: The Crobar, the much-loved rock and metal establishment on Manette Street, Soho, reaches the halfway mark since starting its #crofund.

When The Crobar announced its closure, fans around the world contributed to an online raffle to win big prizes like Dave Grohl’s drum cymbal to help pay the bar staff who found themselves permanently out of work, raising £20,000.

It kickstarted the campaign to reopen the bar, collaborating with the #SaveOurVenues, #WeMakeEvents, #SaveSoho and #LetTheMusicPlay social and community movements.

As the pandemic continues to claim the existence of many more beloved music venues and bars across the country, The Crobar fan base is doing all it can to meet the target, as many see it as a ‘home-away-from-home.’

More Than Another Soho Bar
Documentary filmmakers Lucy Brown and Andrew Wildey put a callout to people about their time in Soho and The Crobar to discover what the area and the bar means to them.

They were joined by fellow filmmaker and community activist, Paul Atherton, who gave a brief tour of Soho’s prominent sites, adding to the #SaveSoho conversation and movement.

The documentary – ‘Music When the Lights Go Out’ – will premiere on Wednesday 27 January at 20:00 on YouTube – bit.ly/MusicWhenLightsGoOut – check out the trailer here

“We had a huge response of photos, videos and stories from people who miss The Crobar and who used to party in the ‘Golden Triangle of Rock ‘n’ Roll’,” says Lucy.

“Reading the messages from people remembering better times really struck us with what was being lost to the pandemic. I think everyone knows and loves a place like The Crobar.”

“As Richard says in the film – it’s not about the four walls, it’s about the people, and I think now we should take an “all hands on deck” attitude when it comes to supporting the live music venue industry.”

From its legendary jukebox, to the “best corridor that is a bar”, the quirks of The Crobar made it a popular hotspot for even the most unlikely of visitors – like Justin Beiber and Lady Gaga – and members of Iron Maiden and Metallica, Sourvein, Down, and Kid Rock.

And who can forget those toilets?¹

Everyone who ever went to The Crobar always had a tale or two to tell² and it was always easy to make friends. So much so that The Crobar hosted three weddings and had to start selling Crobar baby grows and bibs³.

“Four walls make a room; People make a bar”
Richard Thomas, proprietor of The Crobar, adds: “I’ve been here for 20 years and am so overwhelmed by the support. When Lucy approached me to do a documentary about the bar and Soho, I was overcome with emotion as it just demonstrated to me again exactly how important it is to reopen in this area so that people can see their friends and rock families again – and get home safely.”

“Soho is the epicentre for many to travel to their respective homes, safely, which is another reason why The Crobar needs to remain here.”

“I have to admit, I did a little dance when we hit £40,000, as it gave me hope and more determination to save Soho and reopen The Crobar,” continues Richard. “I know we meant a lot to our customers, but I didn’t realise just how much! People want a proper Rock ‘n’ Roll bar to remain in Soho. Otherwise, where else will they go?”

“There is so much history here and it does feel to many that all roads in London lead to this area,” concludes Richard. “Rock and Roll will never die, but if we don’t fight to keep its integrity and quirkiness, then we will just fall victim to faceless gentrification eradicating everything Soho has stood for: tolerance and individuality, love, and Rock ‘n’ Roll for all.”

Live Premiere of Music When the Lights Go Out
The fan-made documentary will be aired live on Wednesday 27th January at 20:00hrs where fans of both Soho and The Crobar can catch themselves on-screen, with historical commentary from Richard and Soho connoisseurs. Check out the trailer here:

Listen out for the stories, the history and feel the love of why The Crobar must live on!

The documentary – ‘Music When the Lights Go Out’ – premieres on Wednesday 27 January at 20:00 on YouTube – bit.ly/MusicWhenLightsGoOut

About The Crobar
The Crobar was founded in July 2001 (but didn’t get it’s name until spring 2002), by a couple of Metalheads who saw the need for a dedicated Rock and Metal bar in Soho. Up until then, there had been pubs who tolerated the Rock and Metal crowd, such as The Royal George in Gosslet Yard, who got The Astoria’s pre gig crowd, but none had actively sought to be a Rock bar.

“Gigs and Rock club nights are all well and good, but Rockers and Headbangers don’t mosh 24/7, and needed a place where they could sit and chat over a bottle of Budvar or a Bulleit & coke without being gawped at by suits and tourists, and without having to listen to Pop music. We rectified that, and The Crobar became the London home of Rockers & Headbangers from all over the world,” concludes Richard.

About The #Crofund
https://www.crowdfunder.co.uk/crobar
There are many prizes to be won with a minimum donation of £10. All Crofunders will have a dedicated name carved into the ‘Crofund wall of fame’ in the new venue. Donations over £25 are automatically entered into a prize draw to win specially designed Crofund T-Shirts and loads more memorabilia.

About Filmmakers Lucy Brown and Andrew Wildey
As fans of The Crobar and Soho, filmmakers Lucy and Andrew wanted to give Richard a chance to tell his story and invoke the spirit of rock and roll amid the chaos and despair of the global pandemic.