ASPHYX are now launching a new single for the album with the song “The Nameless Elite” today, which can also be seen in a video created by Maurice Swinkels / Younique Film (Legion Of The Damned, Exodus, Kataklysm, etc.) here: https://youtu.be/RnlmBNeopmE

ASPHYX frontman Martin van Drunen checked in about the song and clip as follows:

“This third single of our forthcoming ‘Necroceros’ album is entitled “The Nameless Elite” and is about modern-day warfare, especially about the brave men and women in the many international elite units that combat any form of terror to protect us all against violent acts of insanity.

We thought the location at the Overloon War Museum was a fantastic one to shoot a video for any kind of song dealing about war and the Sherman tank in the clip actually did serve during WWII on the battlefields in that area. It may not be directly related to the content of the track, but ASPHYX is a band that has always and will always take on any subject concerning war, without glorifying it. War is Hell.

We would very much like to thank the wonderful cooperative people of the Overloon War Museum in The Netherlands for giving us permission to shoot there, causing pleasant chaos with our noise and smoke!” 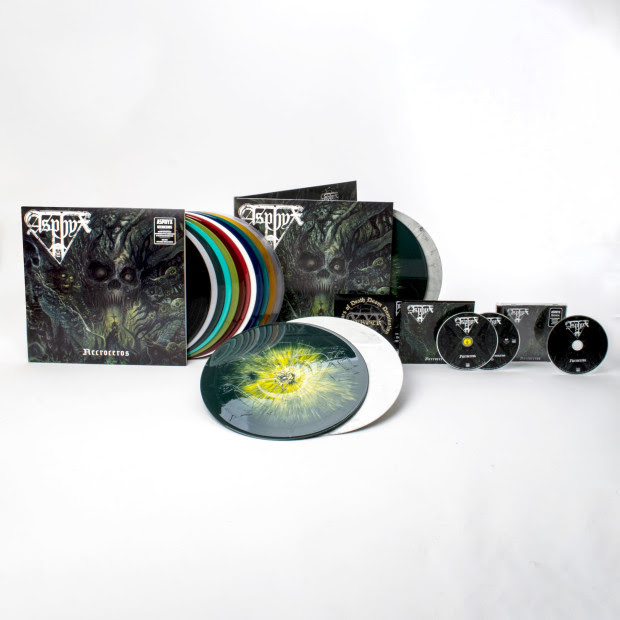 The strictly limited Deluxe 2LP version of “Necroceros” is available either as dark green-yellow-white splattered vinyl (Limited to 500x copies, already sold out from a few copies to be available from the band at shows in the future!) or as white-black marbled vinyl (Limited to 500x copies available from Nuclear Blast). Next to the “30 Years of Death Doom Domination” Bonus DVD, this Deluxe format of the album will come in Gatefold packaging with a bonus 12” vinyl, featuring 2 bonus-tracks (“Full Death Metal Scenario” and “Triple D”) on side C and an Etching on side D. This edition also includes the double-sided A2 poster, an exclusive LP booklet of 24 pages as well as an originally signed ASPHYX photocard.

ASPHYX have most recently also announced a very special FREE live-stream release show for “Necroceros” to be held on Saturday, January 23rd, 2021 at the “Metropool” venue in Hengelo, The Netherlands and the event accessible via the club’s website and their online outlets. The concert will start at 9 PM CET, but check here for your local time info and further details: Here is an overview for all ASPHYX live appearances announced so far:

And many more shows and further ASPHYX news to follow soon…