The Lounge Kittens have announced that they’ll be disbanding after playing their final shows in Manchester, London and Southampton in February 2020.

The Southampton trio have become regulars on the festival scene and touring circuit since they crashed into the lives of every YouTubing metalhead with their infamous cover of Rollin’ by Limp Bizkit. After opening the nu-metal heroes’ set on the main stage at Sonisphere 2014 it soon became impossible to ignore the Kittens as they were invited to tour alongside Steel Panther, Jaret Reddick (Bowling for Soup) and Status Quo.

Two EPs and one album later, the band spent much of this year pushing their way through the recent PledgeMusic meltdown; rewarding fans with the items they’d pledged for despite the (now deceased) crowdfunding site failing to pass on more than £15,000 of their fans’ money. “It was never about the money,” says Zan (the Pink one). “But the stress of the PledgeMusic situation definitely played a part in our decision. To work THAT HARD for so long and still not be able to pay the bills at the end of it all is disappointing and it can’t help but suck a little bit of the fun out of things. And we never, ever want it to stop being fun. That’s the whole point of everything.”

The harmonic trio turned their love for what they do into a fan-focussed community, speaking out about mental health and encouraging their followers to do the same. “Sharing music with your friends is one of the most fun, intimate and life-affirming things you can ever do. Sharing music with strangers and bonding with them in the same way is quite frankly, out of this world,” says Jen (the Red one). “We never expected even a quarter of the experiences and opportunities we’ve been lucky enough to share together. No amount of music appreciation, research, reading or practice can really prepare you for the ups and downs that come with being in a band, but through all the difficulties we’ve met so many incredible fans along the way.”

Timia (the Blue one) continues, “TLK has been a bonding experience so wild and extraordinary I doubt anything will ever compare to it. To have an opportunity to connect with people – both the girls and everyone spiralling out from them who found a sense of fun or belonging as part of ‘Team Kitten’ has been a privilege and I feel extremely fortunate and toasty to have ridden this magical wave for as long as we did. Our intentions were to create a little light relief in our own lives and maybe a handful of others, crack a few smiles and get a couple of laughs – and somehow knocked it out the park in a way we daren’t dream was possible. I’m so proud.”

Fans of the band’s unusual covers still have a few chances to see them live. They support Electric 6 at Shepherd’s Bush Empire on 30th November and perform some kid-friendly shows in London and Southampton on 1st & 7th December, as well as their final shows scheduled for February 2020. In their social media post they stated: “We decided that if we were going to call time on the band, then there’s only one way we want to go out – the three of us standing together and having a big fucking last laugh. We would like our final shows to be a huge celebration of everything that we’ve achieved over the past 6 years (and by ‘we’, we mean us three, the whole of our extended Team Kitten and all of you lot).”
THURSDAY 27 FEBRUARY 2019 – BAND ON THE WALL, MANCHESTER 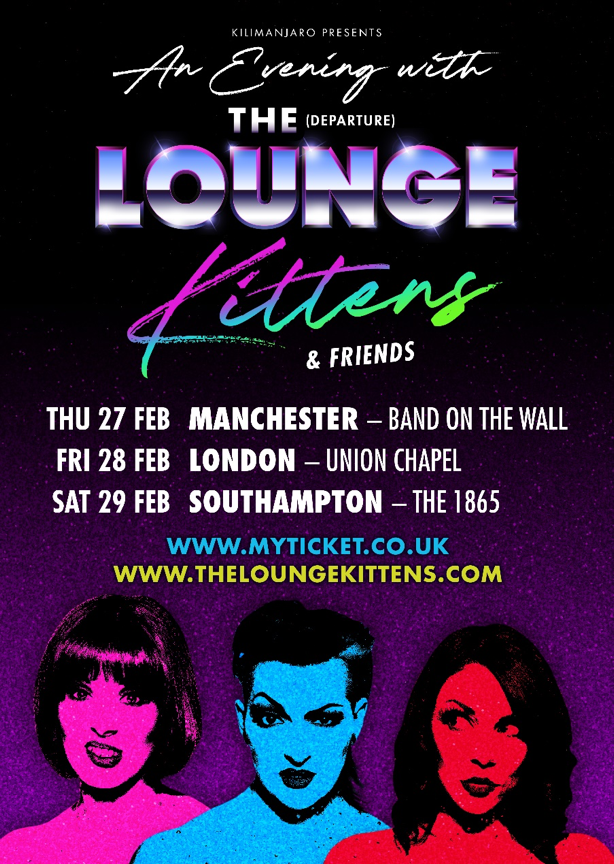