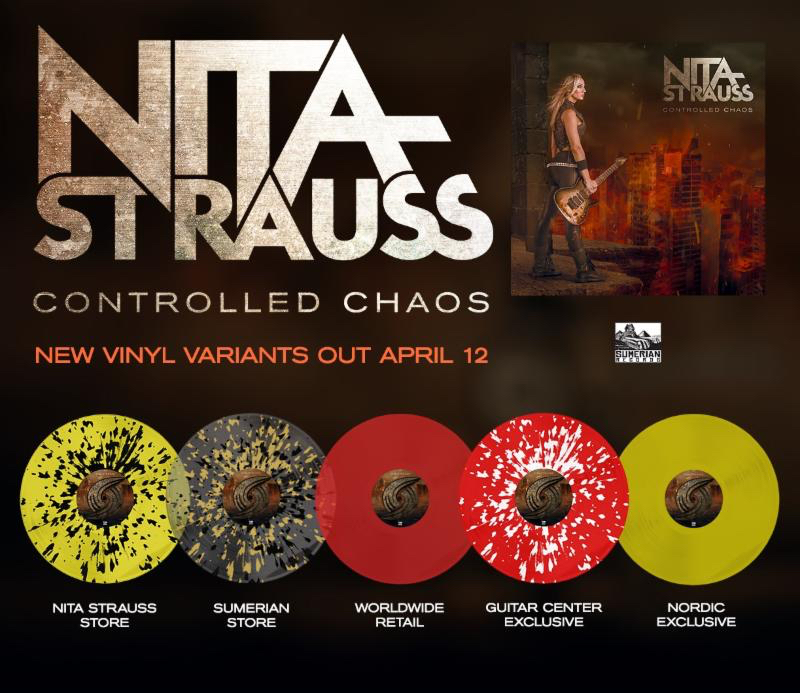 Los Angeles Born guitarist, Nita Strauss, one of the most sought after and respected musicians in the world, has today announced that her debut album, ‘Controlled Chaos’ (Sumerian Records) will be released on vinyl on April 12th with several variants available.   ‘Controlled Chaos’ will be available on vinyl in the following colour variants: Worldwide retail version features a red vinyl and is available from all usual outlets Yellow with black splatter variant exclusively available from NitaStrauss.com, Clear vinyl with black and gold splatter variant exclusively available from SumerianMerch.com Red transparent vinyl with white splatter variant exclusively available from Guitar Centre Nordic exclusive transparent yellow vinyl available from select retailers. The critically acclaimed debut is an epic, 11-track journey of jaw-dropping technical proficiency and highly emotive song writing and went straight into the top ten on the iTunes Rock chart upon release on November 16 2018 and debuted at #1 on Billboard’s Top New Artists Chart, #3 on the Billboard Label Independent Chart and #4 on Billboard’s Top Hard Rock chart.   As well as wowing fans all over the world as Alice Cooper’s touring guitarist, gracing the covers of Guitar World and Guitar Player, performing for millions upon millions of WWE fans worldwide at Wrestlemania and Evolution, becoming the first female to have a signature Ibanez guitar (which now hangs in the entrance to the legendary Guitar Centre on Sunset Blvd ), breaking attendance records at guitar clinics across the country, playing ‘America The Beautiful’ at the the Seattle Seahawks vs Los Angeles Rams NFL game last year and being interviewed about her strict fitness regime in the likes of Muscle and Fitness Hers , Nita also found time to write, produce, engineer and record all guitar and bass parts on her debut solo album, ‘Controlled Chaos’.   “From bright and fun to aggressive and dark, from peaceful to chaotic, this album is a way for me to give the listener a glimpse into my personality and what goes on inside my mind.”   Through obsession, dedication and sheer hard work, Nita has not only been firmly established as one of the best guitarists in the world, she is also a role model, a trail blazer, a fitness fanatic, a phenomenal performer and a total badass. She was honoured at this year’s She Rocks Awards as the recipient of the ‘Inspire’ Award that was presented to her by her life-long hero, Steve Vai.    As well as performing with Alice Cooper, she has also played with R&B star Jermaine Jackson, early MTV darlings Femme Fatale, video game supergroup Critical Hit and popular tribute band The Iron Maidens. Her skill, exuberant stage presence and love for all things guitar have seen Nita become a truly unstoppable, limitless force, blazing a previously untrodden trail.     https://www.facebook.com/NitaStrauss/