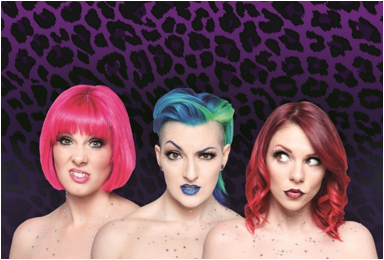 Photo Credit: Paul Harries
The internet’s favourite cover girls, THE LOUNGE KITTENS, have announced they’re going back into the studio to record a new mini-album.

Following on from their 2016 debut album ‘Sequins & C-Bombs’, which was funded via a wildly successful PledgeMusic campaign, the sultry songstresses have decided to return to crowdfunding to fulfil their latest project. “It’s no secret that it’s nigh on impossible to make any money as a musician these days,” says Timia (The Blue One). “We don’t have a label supporting us, we made our own label (Grweat Records) and we do it all pretty much ourselves. So not only do services like PledgeMusic allow us to avoid mountains of credit card debt whilst we cross our fingers and hope someone buys the CD at the end of it, but it’s a crazy cool way to get the fans involved.”

“Our fans are AMAZING. I know every band says that, but our fans are the bonkers kind of amazing,” says Jen (The Red One). “They really got involved in the album process and we know they’ll have our backs with this new project. We can’t wait to meet more of them! It really gives you a push, keeping them updated and seeing their excitement for what you’re working on.”

The girls are promising new music, new videos and new tour dates, all to be revealed soon but as they head off to France, with sound engineer Olli Daffarn and videographer Marianne Harris in tow, to record the new EP, Zan (the Pink One) explains: “We’ve been through a difficult time. We’ve been a bit quiet for a while now, which was a conscious decision to give ourselves a bit of our own lives back, but we are so ready to start properly working again. We can’t wait to get into the studio and then back out on the road. We’ve got some really exciting things planned!”