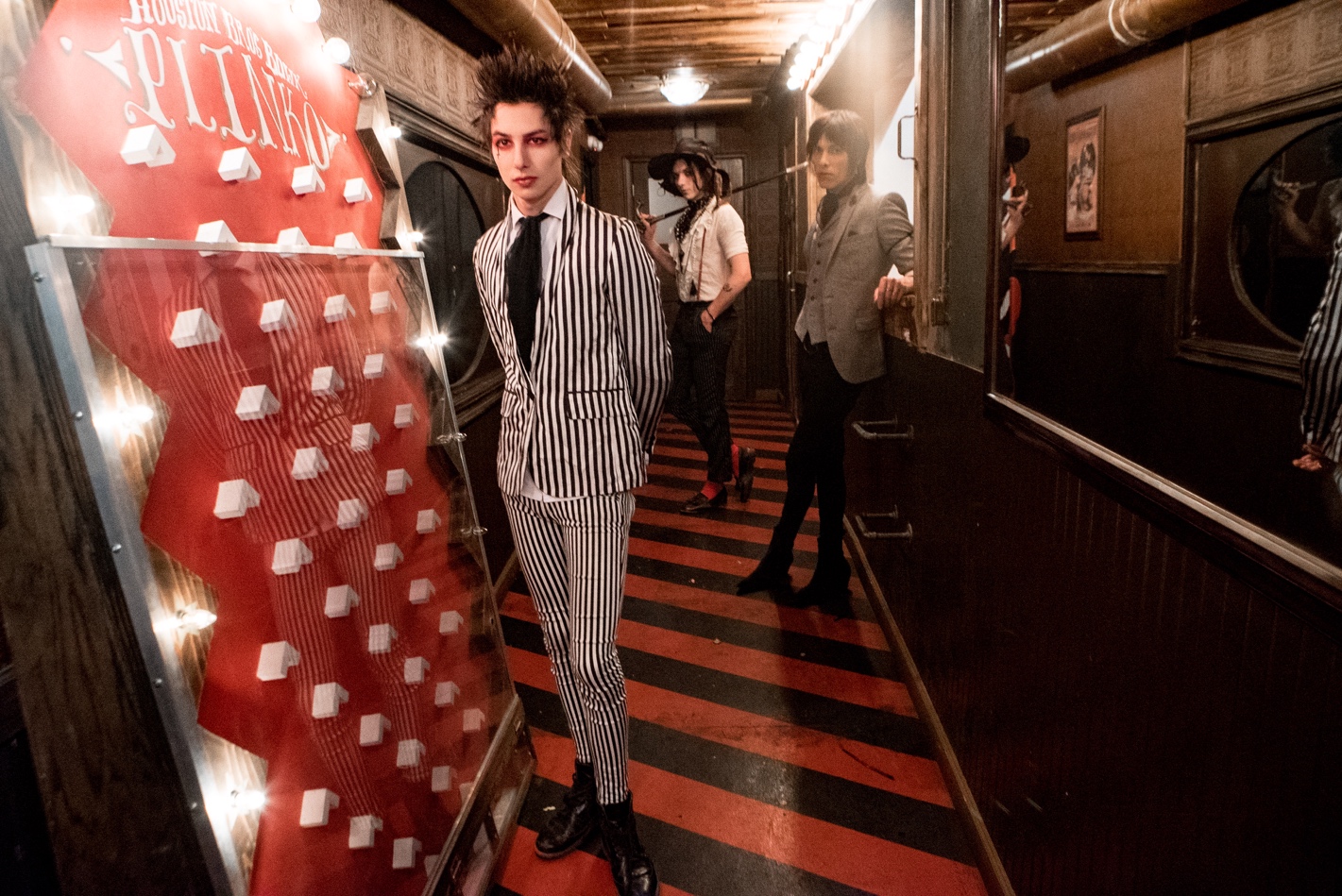 Fashion-rock trio PALAYE ROYALE have announced that their highly anticipated album “Boom Boom Room (Side B)” will be released Friday 28 September via Sumerian Records and will feature 8 brand new tracks, including the recently released single ‘You’ll Be Fine’ and brand new track ‘Death Dance’ released today.

Pre-orders for “Boom Boom Room (Side B)” are available now via sumerianmerch.com.

Have you ever wondered what you’d get if you took the music of The Libertines and early day Artic Monkeys, blended it with the music of My Chemical Romance, added the swagger of the British Invasion, the flamboyance of Glam Rock and the reckless abandon of Punk? Probably not, but if you were to embark upon such an experiment, the result you’d get would be PALAYE ROYALE.

PALAYE ROYALE are quite the phenomenon. Uniquely encompassing the worlds of music, art, fashion and philosophy and equally at home in the hallways of Los Angeles Fashion Week as they are climbing the lighting tresses at the Vans Warped Tour, PALAYE ROYALE have been dubbed “The Hottest Band of 2018” and simply “the” group of the year by the music press. Having graced the covers of magazines on both sides of the pond this year, singer Remington Leith, guitarist Sebastian Danzig and drummer Emerson Barrett are right on the brink of crossing the divide between success and superstardom.

Having launched in 2011, the band’s debut single ‘Morning Light’ was released in 2012 and has received over 20 million views on Youtube to date. Their second single ‘Get Higher’ saw them enter and win MTV’s ‘Musical March Madness’ competition in 2014. PALAYE ROYALE beat hugely successful bands such as Vampire Weekend, Coldplay and Linkin Park making them the first unsigned act to ever win the competition thanks to their enormous and fiercely loyal fanbase, The Soldiers of The Royal Council. As well as joining the ranks of previous winners such as Ed Sheeran, Green Day and Coheed and Cambria, the band and their track ‘Get Higher’ starred in the worldwide commercial for Samsung Galaxy Note. A pretty impressive achievement considering the band were all still in their teens and had no record label.

The band then hit the road and have toured relentlessly ever since. They released their first full length album, “Boom Boom Room (Side A)” (produced by James Iha of The Smashing Pumpkins and A Perfect Circle) in 2016 and continued with consistent touring, their electrifying live performances selling out theatres and stealing the show at major festivals nationwide as well as inspiring levels of cult-like devotion from their ever-growing fanbase similar to that of My Chemical Romance or Twenty One Pilots.

Now, following a hugely successful summer on the last ever Vans Warped Tour, the lead single ‘You’ll Be Fine’ already making a sizeable impact on streaming sites, their combined YouTube views currently totalling over 30 million, a handful of headline dates already announced for the fall (including an already-sold-out show at the El Rey Theatre in Los Angeles) and the imminent announcement of a full, nationwide headline tour, PALAYE ROYALE are preparing to unleash “Boom Boom Room (Side B)” upon the world.

﻿Giving fans a further taste of what’s to come with today’s brand new track ‘Death Dance’, the band say: “‘Death Dance’ is the newest attempt from PALAYE ROYALE to accurately describe the point of view of growing up in a society that enforces contradictory rules.

“Current life for the youth is spent in depression, anxiety, focusing on image problems and self harm. The mainstream culture stays away from addressing topics such as these simply because it is not popular to talk about. ‘Death Dance’ is a representation of our time and place in culture.

Whilst “Boom Boom Room (Side B)” sees the closing of a chapter for PALAYE ROYALE, they are just getting started. At a time where public perception seems to be that the genre is on life support, PALAYE ROYALE could just be the shot of adrenaline needed to bring back rock ‘n’ roll. 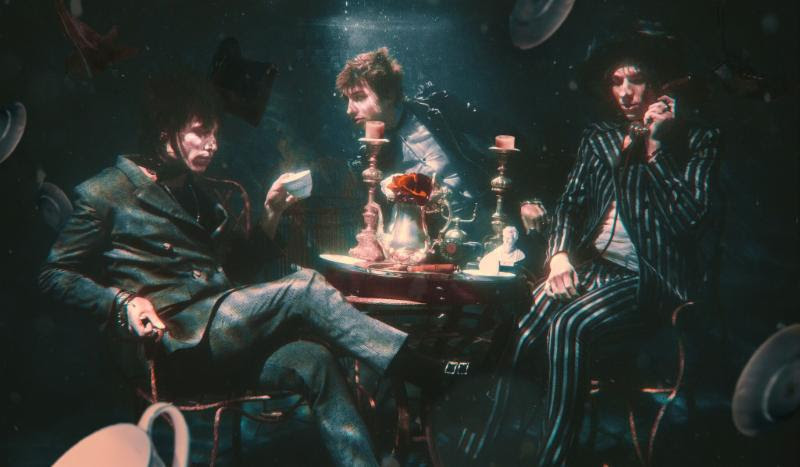 Here’s what the press are saying about PALAYE ROYALE:

“If you want theatrics, these boys deliver in spades – and not just in their headline-grabbing threads and eye-popping stage show.” – Classic Rock Magazine

“Indie with a little bit more of what you fancy….Though their chiselled faces are destined to appear on posters on bedroom walls of many a teen, there’s substance beneath the surface”. – Louder Sound

“The hottest new band on the planet. Three brothers with a penchant for doing things their own way, they’re bringing rock ‘n’ roll to a new generation” – Rock Sound Magazine (cover feature)

“Palaye Royale demonstrated that they are way more than their flawless fashion, their sound and showmanship is proof that rock is still alive; it was fascinating to see such a young crowd enjoy the revitalized sound”. – Spill Magazine

“..the performance of the day from Palaye Royale… teetered thrillingly on the edge of chaos. The young Torontonians dressed up, rocked hard, threw guitars, fell over, rolled on the floor…. When Iggy Pop-style singer Remington Leith clambered atop the speaker stack, he caused a panic among security staff” – The Guardian (Slam Dunk Festival Review) 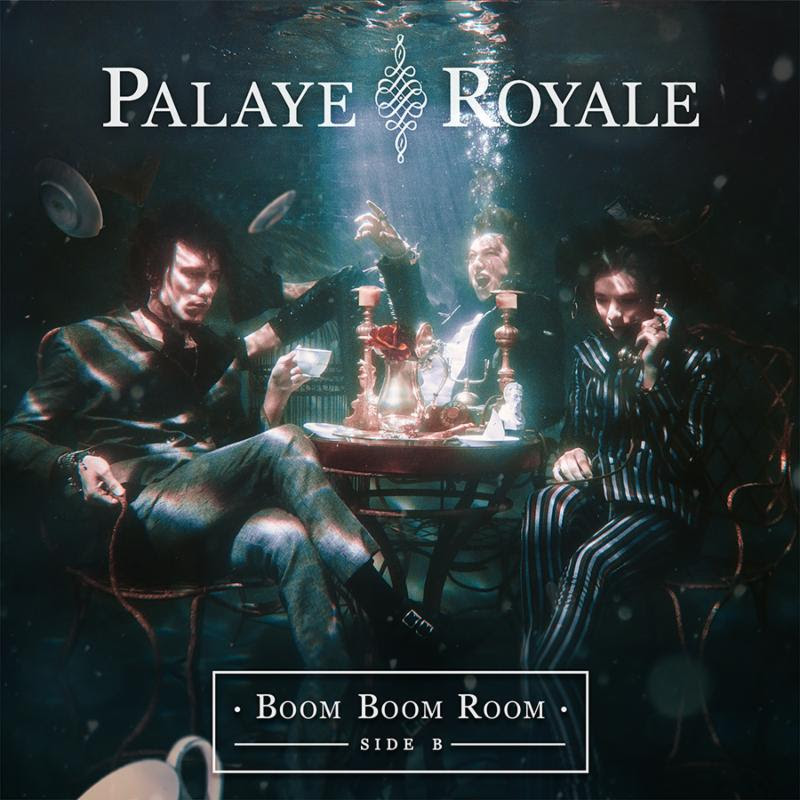 “Boom Boom Room (Side B)” will be released via Sumerian Records on 28 September 2018. The full track listing is as follows:

The band returns to the UK in October for their first headline tour, the first show of which is sold out with the other two already very close.