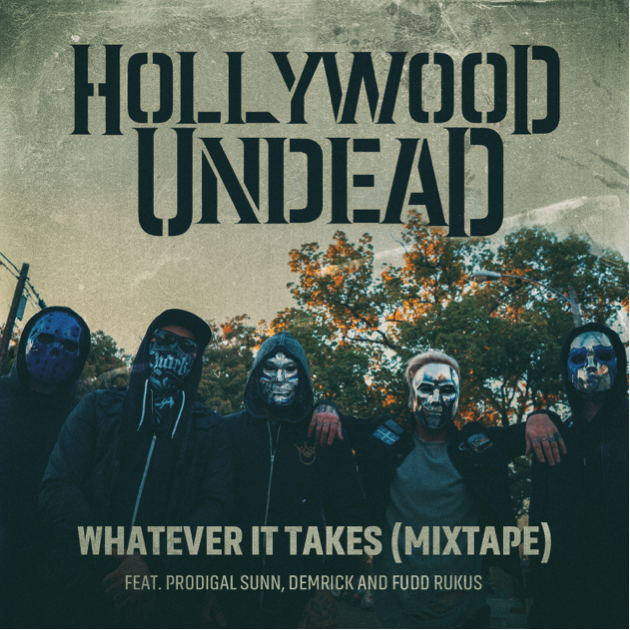 Today, Hollywood Undead unveiled a new version of their hit single, “Whatever It Takes,” featuring notable recording artists Prodigal Sunn, Demrick, and Fudd Rukus. The mixtape edition of the song is available to stream and purchase on digital retailers, and fans can grab a listen and watch the music video HERE. The video was once again directed by Brian Cox, who has been at the helm for other signature Hollywood Undead videos including “California Dreaming” and “Black Cadillac.” The original track appears on the band’s fifth studio album, FIVE, released October 27th, 2017 via Dove & Grenade Media/BMG.

“It’s such an honor for us as a band to share this song with some extremely talented artists and friends,” says Johnny 3 Tears, Hollywood Undead’s vocalist and bass guitarist. “The song is about doing whatever we have to in order to overcome any circumstance, which is something everyone goes through in life. It’s amazing to hear new stories on the same song. What’s your story?”

After completing a substantial run of European dates earlier this year, Hollywood Undead are currently back on the road for a tour across North America. After selling out venues in London, Munich, Budapest, Prague, and more, it’s needless to say that the quintet’s atomic live performances are in high demand. To see it for yourself, check out the official live video of “Renegade” from the band’s headline performance at Moscow’s Adrenaline Stadium.

Hollywood Undead are confirmed to headline The Pit stage at this year’s Reading & Leeds Festival:

FIVE debuted at #7 on the Billboard Top Albums Chart and has accumulated over 35 million streams, led by standout tracks “California Dreaming,” “Whatever It Takes” and “Bad Moon.” The record threads together a collage of metallic instrumentation, street corner poetry, and industrial haze, and Hollywood Undead’s “penchant for experimentation, as well as a flair for pop craftsmanship, is what sets [the band] apart from some of their contemporaries” (AllMusic).