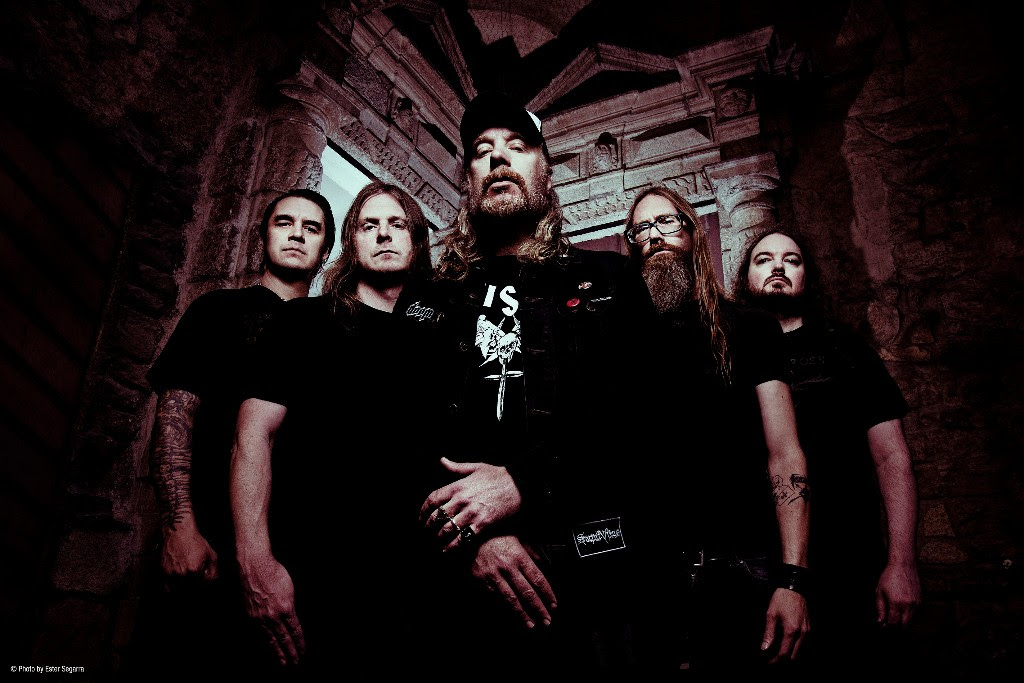 Swedish melodic Death Metal pioneers AT THE GATES continue pre-promoting their much anticipated new studio album “To Drink From The Night Itself” (Out May 18th, 2018 via Century Media Records) by launching its second single and video.

Check out “A Stare Bound In Stone” in a video-clip created by Costin Chioreanu / Twilight 13 Media (who was also in charge of the album’s artwork concept) here: https://youtu.be/oIj6ufFSESU

AT THE GATES frontman Tomas Lindberg comments on the track as follows: “For the second single release of the album we wanted this menacing stormer, fast aggressive verses, heavy chorus and an evil mantra of an ending. This, for me, depicts the desperate, urgent mood of the record. I think it could be one of the most aggressive songs we have ever written. This album is so diverse, and includes so much different elements that it is hard to boil down those essences to just one song. This song has a lot of them though, more to come soon. For the video-shoot we wanted to work with Costin on this one, as he is an essential part of this record. We felt that he knew exactly what kind of emotions we wanted to get across, and how to capture them artistically. I see this video as a brilliant complement to the song. Enjoy!”

Previously, AT THE GATES have launched a video for the album’s title track “To Drink From The Night Itself” in a video directed by Patric Ullaeus / Revolver.se here: https://youtu.be/dhru7gT0cIE

An interesting making-of feature for the “To Drink From The Night Itself” video-clip with band-interview snapshots can now also be seen here: https://youtu.be/9gaQg2eWQLY

Earlier this month AT THE GATES performed a first weekend of shows in order to introduce their current line-up and the group also debuted the upcoming album’s title-track as part of their comprehensive setlist. Check out a short documentary video about the special first club-show in Osnabrück, which was actually performed under the secretive name THE BURNING DARKNESS: https://www.youtube.com/watch?v=KXtnojtU-1E

Next to the standard Jewelcase CD, the Digital Download and the LP version (Various options detailed below!), “To Drink From The Night Itself”, which was produced with Russ Russell (Napalm Death, The Haunted, Dimmu Borgir, etc.) at Parlour Studios in the UK, will also be available in Europe as limited edition Mediabook 2CD (with a bonus-disc of 5 additional tracks, expanded booklet and 3 stickers) and as strictly limited and numbered LP-Boxset.

The LP format comes as 180gr.vinyl in Gatefold packaging with 8-pages LP-booklet and an art-print in the following different versions, colours and limitations (Please notice correction of amount for the sea glass green edition!):

The album’s LP-Boxset is strictly limited to 2000 numbered copies and will include a special triple Gatefold version with alternate cover artwork, LP-booklet, 4 art-prints, a bonus LP with the 5 additional tracks and etching on B-side, a large poster, a large patch, a metal-pin, a hand-signed card, a set of 3 stickers as well as the album’s CD and bonus-disc ion plastic sleeves.

AT THE GATES – “To Drink From The Night Itself“:
1. Der Widerstand
2. To Drink From The Night Itself
3. A Stare Bound In Stone
4. Palace Of Lepers
5. Daggers Of Black Haze
6. The Chasm
7. In Nameless Sleep
8. The Colours Of The Beast
9. A Labyrinth Of Tombs
10. Seas Of Starvation
11. In Death They Shall Burn
12. The Mirror Black The previously mentioned additional tracks on the 2CD and LP-Boxset editions of the album include alternate versions of album-songs featuring appearances by the following guest vocalists: Rob Miller (Amebix, Tau Cross), Per Boder (God Macabre) and Mikael Nox Pettersson (Craft). The track-listing reads as follows.

You can now pre-order “To Drink From The Night Itself” in its various formats here:
https://AtTheGates.lnk.to/ToDrinkFromTheNightItself

In related news, AT THE GATES are also part of the Flexi 7” Series by US magazine Decibel with a special new rendition of “Raped By The Light Of Christ (2018)” as part of their next monthly issue. You can however already stream the track online here: https://www.decibelmagazine.com/2018/03/23/hear-exclusive-new-at-the-gates-recording-raped-by-the-light-of-christ-2018-via-decibel-flexi-series/

On the live-front, AT THE GATES are now also headed overseas to perform at Decibel’s Metal & Beer Fest this weekend and have additionally just announced two shows in Greece (supported by Memoriam) as part of their live-campaign for the “To Drink From The Night Itself” release. Here is the list of all upcoming shows announced so far (Updates marked *):