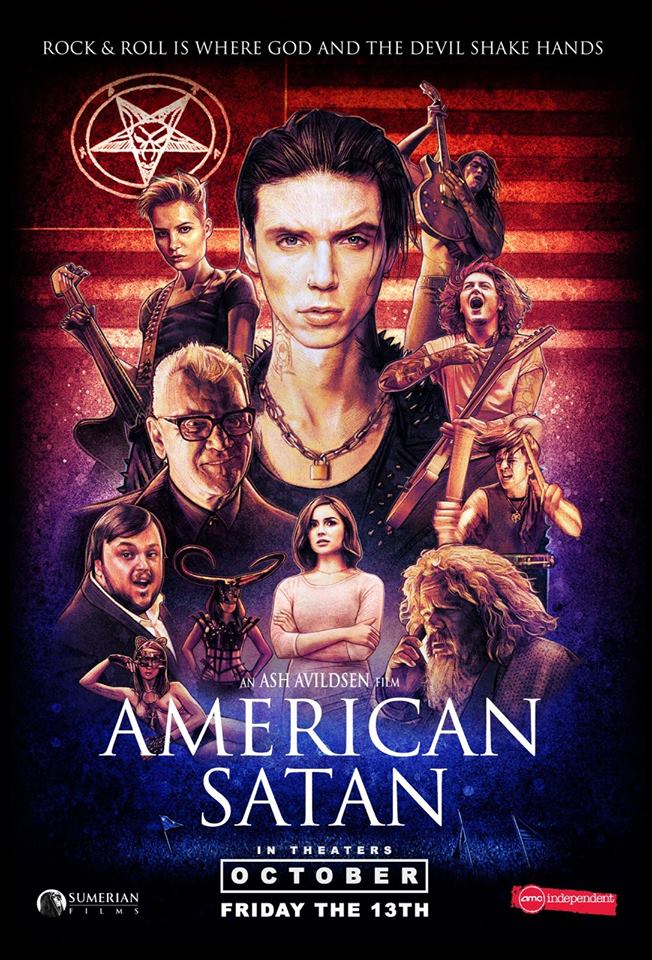 Sumerian Films and MIRAMAX announced they have partnered to release AMERICAN SATAN.

Sumerian to distribute In UK Theatres on Friday, October 20th and VOD early in 2018. Miramax will handle all distribution rights outside of domestic theatrical.

Check out the trailer here: https://www.youtube.com/watch?v=mBhwkckL3nM

AMERICAN SATAN plays upon the dream every kid has of becoming a rock star and asks the question, what would you do to achieve that dream? The story follows a young rock band that moves to Los Angeles to chase their dreams of stardom on the Sunset Strip. Hell-bent on following in the footsteps of their musical idols, they meet an enigmatic stranger (McDowell) who seems to know them better than they know themselves. Preying on their most basic desires and emotions, he entices them with an offer that sets them on a path to fame and fortune; but when they release their debut album, “American Satan,” it sets off a firestorm of controversy, death and destruction beyond anything the music world could ever imagine.

The first single from the AMERICAN SATAN soundtrack, “Let Him Burn” performed by The Relentless was released worldwide on August 11th and hit #1 on digital music charts in 15 countries.

Ash Avildsen: “Some of my favorite films of all time are MIRAMAX movies, so naturally, partnering with them for distribution is incredibly exciting. Finding a home that truly understands rock & roll culture and the loyal fan base that comes with this world of music and storytelling is hard to find in Hollywood. The MIRAMAX team truly gets it. I am ecstatic to show the world AMERICAN SATAN and give both the new and classic generations of music lovers a movie they can call their own.”

The film will open in over 50 cities in the US as well as in Canada, Mexico and Australia all on October 13th. The UK release is scheduled for October 20th and plans for expansion in to more cities and countries is planned for later in the month.

Initial screenings at the Prince Charles Theatre in Leicester Square are as follows:

Tickets are available from: https://princecharlescinema.com/PrinceCharlesCinema.dll/WhatsOn?f=4151825

The most up to date information is available on americansatanmovie.com where you can also get tickets, along with Fandango.com and AtomTickets.com

Sumerian Films was founded by Ash Avildsen, creator of Sumerian Records. Shortly after the laptop he used to begin the label on was inducted in to the Grammy Museum as part of the Golden Gods: History of Heavy Metal exhibit, he decided to diversify the company and go in to tv/film. It wasn’t until after he directed his first feature and began writing his second that he met his father, Academy-Award winner John G. Avildsen (ROCKY, THE KARATE KID) AMERICAN SATAN would become the first thing Ash and his dad bonded over. Growing up knowing his father was a famous director of some of his favorite films but never having a relationship with him made Ash very determined to make it in entertainment on his own, choosing the music business first. Ash and John would go on to spend the last two years becoming great friends and making up for lost time. John was an executive producer on AMERICAN SATAN and also had a cameo in the film, which would become the last movie John worked on before passing away in June 2017. Ash continues the Avildsen legacy with Sumerian Films, focusing on compelling human stories of underdogs and relevant, inspiring characters that speak to today’s culture.

Sumerian Films has a staff of seven at an office just north of the Hollywood Bowl, including producing partners Jeff Cohen and Lorenzo Antonucci.

Acquired by beIN Media Group (beinmediagroup.com) in March 2016, MIRAMAX® is a global film and television studio best known for its award-winning and original content. Nasser Al-Khelaifi serves as Chairman of MIRAMAX® and beIN Media Group. Upcoming projects include the Johnny Depp film Labyrinth which MIRAMAX® is co-financing with Open Road Films, and Whitney, the documentary feature from Oscar®-winning director Kevin Macdonald on pop icon Whitney Houston. Recent releases include Bad Santa 2 starring Billy Bob Thornton and Kathy Bates, Bridget Jones’s Baby, with Oscar® winners Renée Zellweger and Colin Firth reprising their roles in the third installment of the Bridget Jones film series, and Southside With You, inspired by the first date of Barack and Michelle Obama.

Collectively, MIRAMAX’s unrivaled library of more than 700 titles has received 278 Academy Award® nominations and 68 Oscars®, earning most notably four Best Picture awards for The English Patient, Shakespeare in Love, Chicago and No Country for Old Men. More iconic titles from the library include critically acclaimed and commercial hits alike, such as Pulp Fiction, Good Will Hunting, Bridget Jones’s Diary, the Scream film franchise, Kill Bill Vol. 1&2, and The Aviator.