HOLLYWOOD UNDEAD have announced their return to the UK. The Los Angeles five piece kick off their tour in Glasgow, Scotland on 24th Jan 2018, before hitting England for shows in Manchester, Birmingham, Norwich and London.

Known for atomic live performances, the quintet regularly sells out shows around the world from Massachusetts and Miami to Moscow and Manchester, and are looking forward to their UK return:

“We are so happy to be heading out for a tour in Europe. We love playing there, the crowds are great and we love the culture. Can’t wait to see old friends and make new ones. See you soon!”

The band recently released the first single/video from their forthcoming album called “California Dreaming”, racking up close to 1.8 million YouTube views in just 3 weeks. Check it out here: https://www.youtube.com/watch?v=jjjaU5kQV8k


Since the release of their RIAA platinum-certified 2008 debut, Swan Songs. the group’s unmistakable and inebriating distillation of rock, hip-hop, industrial, and electronic has incited the rise of a bona fide cult audience comprised of millions. For the uninitiated, think Trent Reznor producing Enter The Wu-Tang Clan – 36 Chambers in 2020, and you’re halfway there…Quietly infecting the mainstream, their 2011 sophomore effort American Tragedy went gold and bowed at #4 on the Billboard Top 200, while 2013’s Notes From The Underground seized #2. In 2015, Day of the Dead spawned another smash in the form of the title track, which amassed 21.1 million Spotify streams and 17 million YouTube/VEVO views.

Now they gear up to release fifth album ‘V’, out October 27th via BMG. Fans can pre-order the new album from here: http://smarturl.it/HUFive 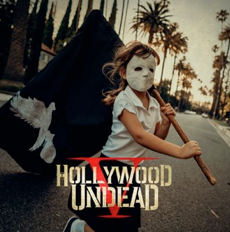