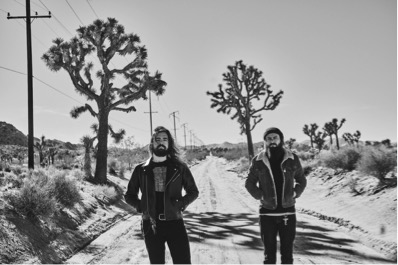 The Picturebooks have launched new single ‘I Need That Oooh’ today. The track is taken from their forthcoming album, ‘Home is a Heartache’, which is set for release on March 10, 2017 via Another Century Records.

‘I Need That Oooh’ can be heard here:
https://soundcloud.com/anothercentury/the-picturebooks-i-need-that-oooh-2

The band explains, “We were on a European tour and stopped at this very remote rest area in Wales to grab some food and to take a break, when Fynn had the idea for the song. The first thing he had was the line ‘I need that Oooh,’ basically meaning ‘I need inspiration and motivation’ — which was exactly what we needed at the time because we had been on tour for such a long time at that point. The rest of the song was written at the rest area without any instruments. Fynn was humming the guitar and melody, improvising lyrics, of which we kept 80% . Phillip was planing out drums in his head, various iPhone recordings were made right there and then. When we returned home, we went straight to the studio and finished the song in just a few days.”

The German duo — featuring Fynn Claus Grabke [vocals, guitar] and Philipp Mirtschink [drums] — performs enticing blues-saturated heavy rock, with Fynn playing on obscure vintage guitars he bought from thrift shops around the world, while Philipp beats a drum set that consists of the largest possible drums that he hits with heavy duty felt beaters. The set has no cymbals whatsoever and instead includes a few self-made percussion instruments with huge chains, bells, and more.

The band has also released a studio video which provides an intimate look into how they created their own unique hideaway to supplement a lack of things to do in their small town. The creative space includes a studio, writing space, motorcycle garage, skate ramp and more.

‘Home is a Heartache’ will serve as the band’s sophomore release and Another Century label-debut. The 14-track album was recorded in the band’s garage, where they regularly refurbish and repair motorcycles and choppers. The album captures a raw, rich, and real energy evoking the room’s natural reverb, industrial aura, and spiritual spark.

Pre-orders for ‘Home is a Heartache’ are available now and fans who pre-order the album through iTunes or Amazon will receive instant downloads of ‘I Need That Oooh’ and ‘Zero Fucks Given’.

It’s not surprising that The Picturebooks record in the same garage where they regularly refurbish and repair motorcycles and choppers. The German duo — Fynn Claus Grabke [vocals, guitar] and Philipp Mirtschink [drums] — captures a raw, rich, and real energy befitting of the room’s natural reverb, industrial aura, and spiritual spark.

Fynn and Philipp first crossed paths at a local skate park. Becoming fast friends, they realized their mutual interests extended beyond skateboarding and into music like The Smiths, The Cure, and Minor Threat. Soon, they began writing songs together, utilizing equipment Fynn’s dad Claus had accumulated over his years as a musician and record producer.

Mirroring their daredevil skateboarding ethos, they broke rules while recording. For starters, there was considerable physical space between the musicians and the microphones, and it wasn’t simply a sterile studio environment. The concrete floors and airy expanse contributed to the sound, and the overall atmosphere proved quite a propos. They even constructed their own instruments to boot. Fynn picked up thrift shop guitars in Los Angeles. Influenced by the tribal sounds of Native American music, the band built custom percussion and augmented their feet with bells. Moreover, Philipp decided to eschew playing cymbals and adopted large Toms, which he bashes with mallets instead of sticks. They conjured true fire in the garage with that astounding, untainted reverb and their personal arsenal of modified instruments.

Ultimately, all of these pieces form a blues-rock pastiche that’s as individualistic as it is infectious. The band signed with Another Century Records in 2016 with their label-debut, ‘Home is a Heartache’ set for release on March 10, 2017.