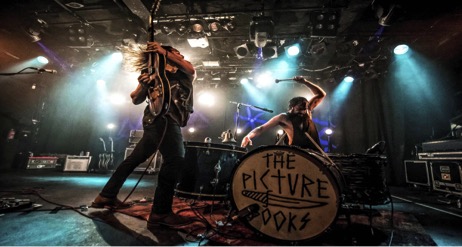 “The biker-blues duo of Fynn Claus Grabke and Philipp Mirtschink create a creepy, David Lynch soundtrack vibe that will appeal to fans of Nick Cave, Tom Waits, the Gun Club and whatever Jack White is lending his guitar skills to.”  Alternative Press

Primal blues-rock duo The Picturebooks are excited to announce the release of their new album Home is a Heartache on March 10, 2017 via Another Century Records. The German duo — featuring Fynn Claus Grabke [vocals, guitar] and Philipp Mirtschink [drums] — performs enticing blues-saturated heavy rock, with Fynn playing on obscure vintage guitars he bought from thrift shops around the world, while Philipp beats a drum set that consists of the largest possible drums that he hits with heavy duty felt beaters. The set has no cymbals whatsoever and instead includes a few self-made percussion instruments with huge chains, bells, and more.

The Picturebooks explain: “We toured our first album Imaginary Horse for more than two years straight with multiple runs in Europe and America — we traveled endless miles in small beat up tour vans on never-ending highways, and lived out of hotels, couches, and sometimes, just the back of our van. When we finally returned home, music started pouring out of us and we finished writing, recording and mixing Home is a Heartache in our garage in just a few months. To us it symbolises this journey we’re on and the music we want to spread, giving it our everything every day and every night.

Home is a Heartache will serve as the band’s sophomore release and Another Century label-debut.

The 14-track album was recorded in the band’s garage, where they regularly refurbish and repair motorcycles and choppers. The album captures a raw, rich, and real energy befitting of the room’s natural reverb, industrial aura, and spiritual spark. Pre-orders for Home is a Heartache begin on January 27, 2017.

The Picturebooks have received acclaim not only for their music, but also for their craft of building and customizing motorcycles, and their skateboarding skills. The band has been featured on Noisey/Vice, Daytrotter, and Alternative Press, to name a few, and the group’s motorcycle designs have been featured in the biggest bike magazines across the world, including Easyriders (USA), Custombike (Germany), Dice Magazine (UK), Hot Bike (Japan), and more. 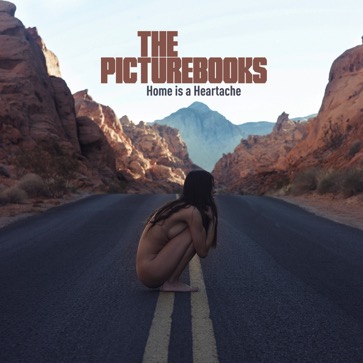 HOME IS A HEARTACHE – Tracklist:

It’s not surprising that The Picturebooks record in the same garage where they regularly refurbish and repair motorcycles and choppers. The German duo — Fynn Claus Grabke [vocals, guitar] and Philipp Mirtschink [drums] — captures a raw, rich, and real energy befitting of the room’s natural reverb, industrial aura, and spiritual spark.

Fynn and Philipp first crossed paths at a local skate park. Becoming fast friends, they realized their mutual interests extended beyond skateboarding and into music like The Smiths, The Cure, and Minor Threat. Soon, they began writing songs together, utilizing equipment Fynn’s dad Claus had accumulated over his years as a musician and record producer.

Mirroring their daredevil skateboarding ethos, they broke rules while recording. For starters, there was considerable physical space between the musicians and the microphones, and it wasn’t simply a sterile studio environment. The concrete floors and airy expanse contributed to the sound, and the overall atmosphere proved quite a propos. They even constructed their own instruments to boot. Fynn picked up thrift shop guitars in Los Angeles. Influenced by the tribal sounds of Native American music, the band built custom percussion and augmented their feet with bells. Moreover, Philipp decided to eschew playing cymbals and adopted large Toms, which he bashes with mallets instead of sticks. They conjured true fire in the garage with that astounding, untainted reverb and their personal arsenal of modified instruments.

Ultimately, all of these pieces form a blues-rock pastiche that’s as individualistic as it is infectious. The band signed with Another Century Records in 2016 with their label-debut, Home is a Heartache set for release on March 10, 2017.